On the anniversary of the 75th Commemoration of the end of WWII, Bolton Clarke At Home Support client and Nerang local Rex Gillham, 90 can still clearly recall the celebrations that occurred in 1945 - from VE Day in May through to the signing of formal surrender documents on 2 September.

Rex was a teenager at the time and living in Kent, and recalls the joyous release felt by everyone – and the cleansing process that went along with it.

“On VE Day all along the cliffs on the South-East coast of Kent everyone got together and made bonfires. Everything related to the war that could be found to burn was burnt – gas masks, paraphernalia, flyers, barricades and more. It was a release from it,” he said.

Rex likens today’s global pandemic to the experience of war.

“It must be very hard for young people to plan ahead. I hope the world and our leaders find a way through it all.

“My advice is to take advantage of everything that’s offered, and still try to find the joy. Make plans and go for it – having something to look forward to helps you hold on to hope.”

He warns against throwing caution to the wind when it’s all over.

“Don’t go too crazy afterwards. All the excitement after it ends will die down eventually. Treat it with care – enjoy it but don’t make any rash decisions!”

Rex’s early experiences of war contributed to his decision to join the Royal Air Force (RAF) in 1948, at age 18. It was a decision that didn’t sit well with his family. 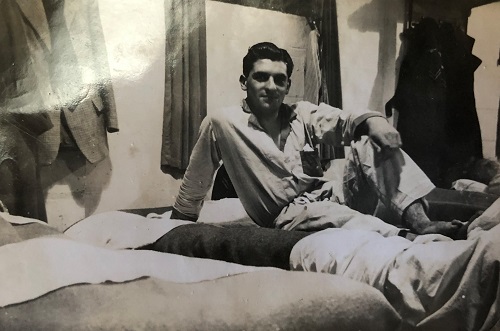 Growing up in the port town of Birchington, he was born into a theatrical family. His father was an operatic tenor, and his grandfather was a director for Keith Prowes, then a theatre ticket agency.

They had hoped Rex would follow in the family footsteps and work in West End also, and he did – but it only lasted six months.

“I was sent to work at one of the ticket booking places and I ruffled feathers because I was brought in above others who were already there – being the grandson, they didn’t like me very much!

“I thought it was brilliant because I when I walked in the place was full of girls on telephones and I thought ‘gee I’m in heaven!”

Rex’s true passion was in radar and telecommunications and it was his work with the RAF that eventually led him to Australia.

“I had an opportunity to join the Malay Police in Kuala Lumpur as a Lieutenant but they were shooting the police at the time, so I wasn’t sent there in the end.”

Eventually the opportunity arose to join the Royal Australian Air Force (RAAF), and in 1952 at the age of 22, Rex arrived in Australia.

“I came by ship to Fremantle. It was a long journey and the food on the ship wasn’t amazing, but by the time we arrived in Australia, we were ready for anything else!

“After arriving at port, we went to this little Greek place. I remember asking for some black coffee with a bit of lemon on the side. What I ended up with was black coffee and Bitter Lemon drink!”

He says coming to Australia was marvellous.

“It was like all of sudden I was free,” he said. “I’ve never regretted it.”

“She was a very attractive natural redhead.”

They married in 1956 at the local registry office and a reception was put on for them by the Air Force near the radar station at Brookvale, where they lived in a garden cottage.

In 1958, Rex left the RAAF and went to York Motors Group who were a major distributor for Rolls Royce in QLD, NSW and the ACT. He worked as a special representative in marketing and sales.

“I used to write to lottery winners to invite them to come view and buy a Rolls Royce,” he says.

“At that time, you could pay your deposit and the car would be getting built in London. If you liked, you could go and visit it when it was nearly done, watch the final touches being put on, drive it around Europe and then have it shipped back to Australia for you.”

“I remember doing one for a gentleman who had won the lottery but couldn’t drive. He thought when he arrived in London that they would teach him!”

Later, Rex worked for Toyota in New South Wales and Queensland and he and Shirley moved to Noosa for a quieter life, eventually settling in Nerang.

They lived there together until Shirley passed away in 2018. They have three children, five grandchildren and 11 great-grandchildren who live from Canberra to Gosford.

Now, Rex is accompanied through life by his best friend Duke, a Tibetan Spaniel.

“He’s a most fantastic little dog and so protective of me,” says Rex.

Margaret Black and J.M Barrie, the author of Peter Pan, have one little thing in common. They were both born in Scotland, five miles from Dundee, in the ‘wee red toon’ called Kirriemuir. Coming from a long-living lineage, the Bolton Clarke At Home Support client truly embodies the spirit of never growing old, as she celebrated her 103rd birthday in April.

For Bolton Clarke At Home Support client Norma, the kindness of community has been life-changing over the past year.

Throughout the pandemic Homeless Persons Program team has been working to find new ways of supporting people sleeping rough or in insecure housing and those experiencing physical, mental and psychological health issues.

A new conversation tool designed to help people with dementia navigate risk and exercise greater choice will be rolled out across Bolton Clarke home care services over coming weeks.

For local indigenous artist Bernard Boyter, NAIDOC Week is an important time to celebrate his aboriginal heritage, educate others and share his passion for painting and culture.

Jack and Elaine Walter know the value of a good book, and the importance of preserving memories for generations to come. The husband-and-wife retirees have just closed the latest chapter of their own personal publishing journey – their memoirs.

Community garden gets the (green) thumbs up

Seniors get active ahead of No Falls Month

Seniors from Bolton Clarke’s Tantula Rise retirement village in Alexandra Headlands have been getting active in a weekly exercise class designed to support balance, agility, and overall fitness.

For Alma, living by herself can make it challenging to stay in touch with the world but this Neighbour Day, 28 March, she’ll be looking forward to her next phone call.

World traveller salutes her 100th birthday with a cup of gin

Dandenong woman Irene Lyall will celebrate 100 years of travelling the world this week – and she’ll be marking the occasion with a teacup filled with gin.

Bing Crosby’s White Christmas may be one of the most popular songs of all time – particularly at this time of year – Bolton Clarke at home support client Irene Gates it has special significance.

At first glimpse it might be hard to see what a retirement village resident from Queensland’s central coast has in common with someone living rough in Melbourne. The clue is in the face mask.

Bolton Clarke has been named the inaugural Future of Ageing Awards winner in the Technology – Health and Wellbeing category for its digital independence offering.

Women using home nursing services are older, less likely to have been born in Australia and have more complex medical needs than 10 years ago, a Melbourne research study has found.

Bolton Clarke, one of Australia's most experienced not-for-profit aged care and senior living providers, has formalised a key joint venture agreement in China that will see the organisation partner on eight continuing care retirement communities serving one of the country’s largest population centres.

Homelessness can make you sick

Homelessness is enough to make you sick. Finding successful ways to engage with clients is the key to successful outreach, Bolton Clarke Homeless Persons Program’s Mary-Anne Rushford told the Social Justice in Nursing and Healthcare Conference in Melbourne on 30 July.

Victorian centenarians kick up their heels

Last month, shortly after celebrating her 103rd birthday in May, Bolton Clarke at home support client May Lowe was recalling a very different anniversary.