The pup-arazzi were out in force at Bolton Clarke’s Glendale residential aged care community in Mt Louisa as residents, their families and employees came together to celebrate man’s best friend at Glendale’s first dog show.

Residents Graham and Bernice Jackson and Anne Thompson took the role of judges, with the tough job of deciding winners from a group of 15 dogs including Sooty, Bruiser, Daisy and Lord Baxter of Jensen - all entered in the show by members of the Glendale community.

“It was so hard to pick a winner,” said Graham. “They all should have won. First prize was especially difficult to decide.”

But pick a winner they did, awarding a tied first place to Mishka the English pointer and Akeara the schweenie with Silver the husky taking out second place followed by Rocko the staffy rounding out the tail end at third.

The best dressed prize was awarded to Marko, a blue heeler who donned a tux, top hat, bowtie and booties for the occasion. 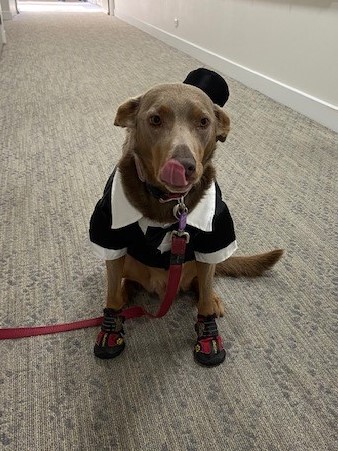 “We could not believe how well behaved all the dogs were,” said Bernice, “and they were all so different!”

“We watched them walk down the runway with their owners, seeing how they walked and if they could do a trick.”

“Each dog was judged on behaviour, grooming and special abilities.”

All the winners were awarded ornamental dogs and prize tags for their collars. Each dog that participated was given a bag of treats handmade by the residents. The owners were not left out and were gifted with a special badge to wear with their dog’s name on it, and a little bag of chocolates.

“It was so enjoyable to be a judge,” said Bernice. “And Debbie is the most amazing person – every detail was attended to. I couldn’t imagine Glendale without her.”

Bolton Clarke Diversional Therapist Deborah Sheppard, the brains behind the special event, said that the beautiful show day weather encouraged more residents to take part and enjoy the sunshine and the event.

“The residents thought it was the best day ever,” she said.

“I’ve been told we should have them more often. The families said it was such an enjoyable day and to see the smiles on everyone’s faces was just beautiful. Everyone thought having a dog show was an amazing idea and to have it go so well was absolutely thrilling for all of us.

“I wanted to do something that was completely different that would bring love and joy to both residents and our team members. Everyone was so excited to bring their dogs to work for the day!

“One team member even volunteered to run ‘doggy day care’ before and after the show!

“Our team members really loved introducing their dogs to our community and the residents were thrilled to meet them all.

“I’m really proud of what we achieved together and so pleased that everyone had a great time.”

Marianne’s been spreading colour for 80 years

Bolton Clarke Glendale residential aged care resident Marianne Garland, has been spreading joy around the world with her colourful knitted creations for more than 80 years.

Reaching a century is always cause for celebration but husband and wife centenarians Max and Lorna have double the reason to celebrate in coming weeks. Max turned 100 on 28 August, with Lorna’s birthday close behind on 21 September.