You’d be forgiven for thinking Almira Argent is too good to be true, such is the level of joy, happiness and positivity she radiates ahead of her 100th birthday on Sunday 31 May.

Although her birthday celebrations won’t be quite as planned owing to travel & social distancing restrictions as a result of COVID-19, she hasn’t let that dampen her spirits.

“It is a terrible shame – but I’m not dwelling on it. If something isn’t wonderful, I work it round to make it that way.”

A lot of Almira’s family live in Mackay, and for those in Sydney & Brisbane she will be using technology to catch up with them on the day. She will mark 100 years surrounded by relatives and joined by friends at her home at Bolton Clarke’s Breezes retirement village.

“All my friends are here,” she says. “It’s wonderful to be in a place like this. I couldn’t wish for better neighbours – everyone is so lovely to me. I’m very pleased that I moved here.”

It’s these strong ties to her community, her positive outlook and making every day count that Almira says have helped her reach her century.

“I think life has treated me wonderfully”, she says. “Helping others, sharing love and joy – that’s what’s important.”

“Give plenty of love and attention and you will get it returned to you.”

She recommends keeping a joyous heart.

“Always be happy – look for happiness and spread it everywhere!”

Almira’s eagerness to seize every moment began at her birth. She arrived earlier than expected in 1920 on the family farm at Pinnacle, 42 miles from Mackay.

“Because I came early my mother didn’t make it to hospital,” she says. “I was born on the farm and all the farmers’ wives helped with the birth.”

The youngest of eight, she grew up on the farm and attended Pinnacle State School from the age of four. She started school early because ‘in those days you had to book in at Christmas.’

In 1932 at age 10, Almira transferred to Saint Gabriel’s boarding school in Charter’s Towers.

After leaving school at 16, she returned to the farm to help her mother run the household.

“My parents were wonderful people. They took me to England a few times to visit family over there.”

Almira was around 20 when she found her two true loves – horses, and her husband Gordon.

“Gordon was a woodchopper,” she says. “I met him at a chopping show, and it was love at first sight.”

“I think of him every part of the day.”

The pair dated for a year before becoming engaged. They were married a year later with a reception of 200 guests at 3pm on a Saturday afternoon in 1940.

“Our wedding was wonderful!” 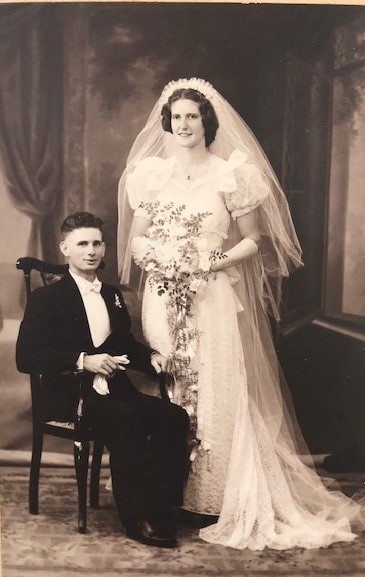 “I had a lovely lace wedding dress with puff sleeves from the elbows up, and a beautiful train.”

The newlyweds honeymooned in Brisbane, taking the train from Mackay, exploring the town and visiting friends they had there.

Like her family before her, she and Gordon were farmers.

Their first, smaller dairy farm was at Andergrove ‘to test the waters’ before moving to a larger dairy and cattle farm at Mt Charlton in 1958, where they built the dairy from the ground up. They moved farms in the course of one day.

“The cows were milked in the morning at Andergrove, loaded onto transport and milked again at Mt Charlton in the afternoon.”

“It was a lovely farm with Dalrymple Creek running through – we had both beef and dairy cattle and of course the horses.

“Our three daughters enjoyed ponies. We bred them and had a private stud.”

Almira competed in horse and pony shows throughout Queensland, including the Brisbane Royal Show. She won many major events and in 1959 was won of the founding members of the Mackay Pony Club.

In the seventies, Almira’s love of horses led her to rubbing shoulders with Princess Anne.

“I had been in the country polo team in my late teens – but I stopped when I got married.”

Later, she got the opportunity to go to Europe and visit the Vienna Riding School.

Her riding connections opened doors at the school, and she was delighted to meet Princess Anne, who was on a training course.

“She addressed me, and I said, ‘Yes, your Highness.’

“She recognised my accent and said, ‘That sounds like Australia.’

“She had a beautiful smile and a lovely soft voice.”

“I had a beautiful time there. It was absolutely wonderful. They put us up in first class accommodation and we ate beautiful food!”

Almira received an extra warm welcome at the school because of her friendship with the Governor’s daughter, Rachel Mansfield.

“We were friends because of horses – and as a result I met the Governor.”

“It’s not what you know, but who you know. I must have cast my spell on some people.”

Almira and Gordon semi-retired in 1983 to Balnagowan, where Almira lived until moving to Breezes retirement village in 2012. Since moving to the village, she has enjoyed the social club activities and the friendships she has made.

“My friends come to my door and offer me coffees.”

Almira says she’s been well-supported during the pandemic.

“Breezes is absolutely wonderful – I’m never afraid of anything because there is always someone nearby to help me.”

Almira is already looking forward to her next birthday and hopes it will be as big as this one.

Her festive outlook is not to be understated. In fact, she will have painted toenails on her big day, courtesy of one of her great-granddaughters.

When asked what colour she smiles and says “purple!”

More from our Centenarian Club...

Helen Christians was born in Ireland in December 1919 on a date that has remained a mystery - but that didn't stop celebrations for her 100th birthday at Bolton Clarke Galleon Gardens.

The secret to a long and happy life? Gratitude, according to Inverpine resident Thelma Sprott, 103.